Using the next generation of industrial digital technologies 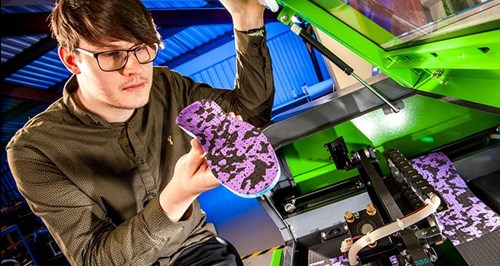 For the last eight years Cadscan has been innovating in the research and design of imaging, 3D printing and 3D visualisation technologies.

The Chester-based business has developed products for industrial, defence and healthcare markets.

Cadscan’s recent focus is bespoke orthoses and is embarking on a trial to create 3D-printed insoles for NHS patients to help prevent diabetic foot ulceration, a major complication of diabetes which in serious cases can result in amputation.

Cadscan wants to tap into the next generation of industrial digital technologies (IDT) to create a fully digital smart factory and cement the next stage of its growth.

According to the NHS, of the 4m people in the UK with diabetes, a quarter will develop a foot ulcer in their lifetime.

Treatment, including surgical intervention and orthotics, costs the NHS around £1bn a year.

Dr Alastair Buchanan, Managing Director of Cadscan, said it is a big problem, affecting a lot of people -and it’s on the rise.

“The number of people with diabetes is going up for a variety of reasons,” he said. “And what is currently being done to bring that number down is not working. According to a study by NICE, custom orthotics and footwear can reduce the chances of getting an ulcer by up to 60%. But the current solutions on offer from the NHS are costly and slow to produce, as well as being bulky, which means patients just aren’t using them.”

“Ultimately, you need to prevent ulceration in the first place. We set ourselves the challenge of coming up with something that is effective yet cheap, quick to make, slim, and easy to live with.”

Cadscan has developed a digital method to design and manufacture bespoke orthoses for the prevention of diabetic foot ulceration.

The system uses a 3D scanner to capture the foot shape and load profile of the patient. This is transmitted to the cloud, where a patient-specific, 3D-print ready design is automatically generated.

It is then sent to a 3D printer for manufacture in Thermoplastic Polyurethane (TPU), a flexible, abrasion resistant thermoplastic.

Cadscan has partnered with the NHS to test the solution on 900 patients over the next year, to ascertain how much the orthotics reduce ulceration rates.

By achieving its goal of providing orthotics quicker and cheaper to public sector healthcare providers, Cadscan hope for a national roll-out.

The ambition is to more than double its current workforce of 10, by creating 15 new jobs over the next three years, as well as taking on apprentices to train into production engineers.

Cadscan estimates that its growth could contribute to an increase in the region’s GVA of £1.2M over the next three years.

“In the UK over 60,000 people have an ulcer at any time, costing the NHS over £970m annually,” he said. “Around 176 people undergo diabetes-related amputation each week, over 9,000 each year. Just a 10% reduction in ulceration rates would massively reduce costs and improve patient outcomes. These amputations can be prevented with the appropriate treatment, such as correctly-fitting footwear.”

Cadscan’s vision is to be able to operate a fully on-demand service at either a medical clinic or at point of sale on the high street.

Until then its ambitions are to scale up to a factory capacity of producing 30,000 pairs of orthotics per year. It also wants to refine its processes, so the manufacturing process is entirely digital.

Cadscan isn’t just looking at UK markets, it is also eyeing up opportunities in America.

Alastair said: “We’ve done the research and know it works. This is our big opportunity to get our product out there. The timing of the Made Smarter pilot could not be any better for us. We are a perfect fit.”